We are a new upcoming travel agency in Benin. We provide the best services and hospitality. Many years of experience in Benin, Togo, Nigeria, Ghana, Burkina Faso, Mali and the other country in West Africa, experience in travelling. With the best guides and drivers we have all the knowledge to tell you everything about Benin.

Benin is a rather unknown country in West Africa. With its stable political government, Benin is a good country to travel to, to do business and many other things.

This flag consists out of two horizontal bands a yellow and a red one. There is a vertical green band at the hoist. This flag was the flag of the Republic of Dahomey before the French occupation. During this period it had the French flag. The three colours of this flag explain the cultural political and regional meanings. The green and the yellow allude to the northern  savannas groves in the south of the country, the red is the blood shed by the cityzen who fought for Dahomey freedom. In Africa the yellow, green and the red represented the Pan-Africanism

From 1975 till 1990 during the communist period  there was a green flag with red star.

The Dawn of a New Day(English) 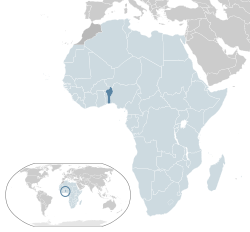 Electricity; is 220 Volt, but many times it is down. To take a flashlight is recommended. A solar light/charger is also very easy to take. The company WAKAWAKA http://it.waka-waka.com/ has very nice lights/power and is also for a good objective (for each solar lamp sold another one will be donated to a poor country where electricity is rare).

Food; some African foods are yam, cassava, maize paste, gari, aloko (baked banana). Many fish, chicken (poulet bicyclette), goat and agouti are eaten. The fruits are delicious, according to the season you can buy pineapple, mango, banana, apples, pawpaw and more.

General message; homosexuality is not accepted by most of the Benin people.

Sex with minors under 21 years is dealed with strictly.

Insurance; it is recommendable to close on a travel insurance with health insurance.

Money; the currency in Benin is the CFA (West Africa Comunauté Financiere Africaine Franc) Many banks have an ATM, but at the most ATM’s you can only take money with a VISA card.

Photography; if you like to make photos of people, ask them first, some people don’t mind, others like to get money for it.

Safety; It is wise not to travel in the night, the roads can be dangerous (holes) and the risk of criminality is bigger. It’s always good to drive with more cars/motorbikes together. Close to the Nigerian border in the south-east gangs can be operating. As a ‘white’ person people mostly think you’re very rich, don’t take expensive jewelry when travelling or show your wallet to people.

Souvenirs; it’s always nice to buy some souvenirs, on the markets you’ll have to bargain the price, but remember, don’t go for the cheapest price; people have to live from it. Not everything is also allowed to import in your country, protected plants, shells, animals. Inform at your customs office.

Swimming; the sea is rather dangerous to swim in.  There is a strong undercurrent. Lifeguards are not seen many times at the beaches. Ask the local people (fishermen) if they have more information. The (private beach 1500CFA entrance) El Dorado Beach club in Cotonou has a safe beach and sea to swim.

Telephone and internet; the phone number for Benin is +229. While travelling in the north you can notice there isn’t network everywhere. In Pendjari National Park there is no network. Internet is rather slow and it can be down also, it is also expensive.

Visa; a visa is required for many countries, except some West-African countries, ask the embassy or consulate.

Water; the water from the tap is not potable, use sealed bottles mineral water.

Weather; the sun is very sharp, take a good sun protection, even when it is cloudy. In January the nights and early mornings can be a little cold, to take a coat or sweater is recommended. Also for the nights in a tent a sleeping bag or blanket is comfortable.

Respect the rules of your guest country!